Unwrap the Secret to Keeping Customers Coming Back All Year Round

All modern cities in the world  have light poles with power. Iveda simply taps into the existing power and equips it with Utilus. Utilus consists of a smart power management and wireless mesh communications network with WiFi, 4G and 5G small cell capabilities and  other wireless protocols as required. 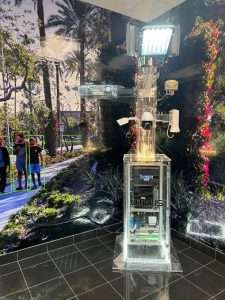 In addition, Utilus includes an energy storage battery system for continuous operation and backup should there be a municipal power outage. With Iveda Pole Gateway and IvedaSPS, the system acts as a microgrid to provide power to mission critical infrastructure when needed. It can also be used for electric car charging stations.Once  light poles are equipped with Utilus, they communicate with each other, establishing a network that provides distributed video surveillance with AI video search technology and remote management of local devices such as trackers, water meters, electrical meters, valves, circuit breakers and sensors.

“Our smart city technologies are the culmination of almost two decades of product development and experience in providing cloud-based solutions,” said David Ly, CEO of Iveda. “Utilus adds a new level of security, safety and management tools for  smart city initiatives. Whether it is instantly identifying and reporting a car accident or recognizing a vehicle with a potential abducted child, seconds matter.”

This announcement coincides with market research showing dramatic growth in the Smart City technology market. According to San Francisco-based Grand View Research, the current Smart City market is valued at $1.1B, with a compound growth rate of 24 percent through 2030. The company’s Smart City market report, released in March 2022, pointed to the integration of IoT, cloud computing, and AI as the main drivers of industry growth.

The report stated that the need for sustainable infrastructure due to increasing population and urbanization has become a prime driver for the growth of the market. Governments worldwide are trying to tackle the challenges with the adoption of  smart city initiatives across functional segments that include utility management, mobility, and safety,” the report stated.

Iveda’s partners in South Africa is on the verge of deploying Utilus for a pilot smart city project at an 18-acre section of a gated community in Johannesburg estimated at over $1.5 million for just the pilot. More details of the project will follow.

“Our partner believes a successful pilot would result in deployment of Iveda’s smart city solution throughout Johannesburg as well as other urban areas of South Africa,” said Ly.

Johannesburg is the 16th largest built-up urban area footprint in the world with estimated 14 million population.

This release includes forward-looking statements. Actual results may vary materially from those expected. Iveda’s business is subject to significant risks and uncertainties described more thoroughly in the Company’s SEC filings, including but not limited to its Registration Statement on Form S-1 and Form 10-12g with audited financials for the year ended December 31, 2021 and December 31, 2020 and its subsequently filed quarterly reports on Form 10-Q. You should not place undue reliance on forward-looking statements since they involve known and unknown risks, uncertainties and other factors that are, in some cases, beyond Iveda’s control and which could, and likely will, materially affect actual results, levels of activity, performance or achievements. All forward-looking statements made herein are qualified by such risk factors, and readers are advised to consider such factors carefully. Iveda undertakes no obligation to revise these forward-looking statements to reflect events or circumstances after the date hereof or to reflect the occurrence of unanticipated events.

Unwrap the Secret to Keeping Customers Coming Back All Year Round